Changes from the SECURE Act 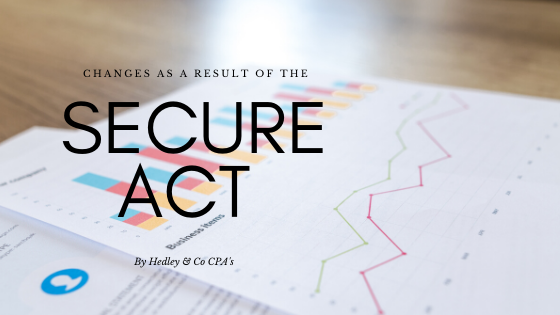 One of the biggest changes in the SECURE Act is the Required Minimum Distribution (RMD) age.  It has been increased 18 months. Rather than people being required to take RMDs at age 70½, RMDs will start at age 72. This will allow workers another year-and-a-half to build their retirement accounts.

And luckily for all concerned, 72 is a less confusing age to deal with than 70½. This will give advisors one less thing to worry about having to explain to their clients when it comes to retirement and RMDs.

The SECURE Act will now allow new parents to withdraw up to $5,000 from their retirement plans to cover expenses related to the birth or adoption of a new child, without the 10% early withdrawal penalty. Taxes will still be due on the withdrawals.

It also allows withdrawals of as much as $10,000 from 529 education-savings plans for repayments on student loans. On top of this, the 529 plans may also cover costs associated with registered apprenticeships. According to NBC News, the numbers of American over the age of 60 with student loan debt has more than doubled in the last decade. As the chart above shows, the numbers are truly staggering when it comes to student loans, so the relief provided in the SECURE Act is much needed.

The SECURE Act will no longer allow all beneficiaries who inherit an IRA to “stretch out” distributions over the beneficiary’s life when liquidating the account. Instead, it requires liquidations within 10 years of the newly inherited account, which decreases the value of the inheritance. There are a few exceptions, however, such as when the beneficiary is the surviving spouse, disabled or chronically ill, not more than 10 years younger than the deceased IRA owner, or a child who hasn’t reached age of maturity.

The SECURE Act will allow companies to create open multiple-employer plans (MEPs) and will thus encourage retirement savings. Employers will be allowed to join a pooled arrangement that permits different types of employers to collectively offer a retirement plan to their employees for the first time ever. On top of this, there is a tax credit of $500. Thus, small employers without an affiliation can band together to offer a common 401(k) plan to their workers. This will reduce the costs and administrative duties that each employer would otherwise bear alone